Can You Win Some of the Gladiators Gold? 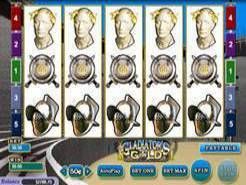 Play Now
Some slots really do look far more complex than others, while some prefer to keep things pretty simple. Gladiators Gold manages to fall somewhere in-between those two, giving you access to a nice-looking slot while not managing to do a lot with the design. The closer you look, the more you will see though, and it is clear there is a gladiatorial arena depicted behind the reels. It’s what happens on the reels that will be most important though.

There are five reels in place to appeal to you here, but it only has five lines. That means you have just five chances at bagging a win with every spin you make.

The one upside of having a low number of lines is that you can easily cover all of them. This also gives you more chance of having more spins on the game, as they’ll be cheaper. With a one-cent minimum you could play all the lines for just five cents. On the other hand, a $50 max bet is possible with $10 on each line.

Does Gladiators Gold have more valuable symbols in play?

The pay table is very easy to understand, and in fact it has little to offer except for a variety of Roman-themed symbols. Caesar appears to be one of them, along with a Roman helmet, a breastplate, a lion and some axes. You will also spot the Colosseum as another symbol. But none of these symbols have any special features. You won’t find a wild here and there is no scatter available either. That’s a real shame, because we can’t help but feel even these would have improved the overall playability of this game.

Nope – just as there is no wild and no scatter, you won’t find any sort of bonus here either. Not even some free spins!

As far as five-reel games go, this is about as basic as you could ever hope to see. It’s good to play for a few rounds, but unless you are lucky enough to start winning with every spin, which is unlikely, we don’t think you will stay around for very long at all. It’s a shame, because Gladiators Gold could have been so much better.
Play Now
Previous slideNext slide