Face Up to the Mighty Eastern Dragon! 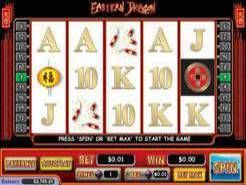 Play Now
We think you will probably guess what the theme is here, since a dragon is mentioned. These figure quite regularly in Chinese lore, and they feature in this game too. Hailing from Wager Gaming, it provides quite a nice slot experience for players to enjoy, but it remains to be seen whether it has enough to appeal to you. Let’s see just what it holds in store.

Many of the games from this software provider have five reels, and this one is certainly no different. It also has a fairly familiar 20 lines in action.

They do love the one cent to ten dollars idea at Wager Gaming, as you will know if you have played a few of their other slots. And the exact same coins are in play here as well.

Does Eastern Dragon have more valuable symbols in play?

Yes, the Chinese coin with a square hole in it is the scatter and you only need a couple of these anywhere to enjoy a win. You can also look for the Eastern Dragon itself, which is capable of appearing as a wild on the two outer reels (one and five). It can replace everything else you might see in this game, apart from the Chinese scattered coin. If you are fortunate to find a dragon as part of any win, that win is doubled.

There is a standard free games feature you can win if you get a dragon appearing on both the first and the fifth reels at the same time. This triggers 15 free games for you to play through. Triple-value wins are possible in this game, so you could mount up some nice prizes as you play. You can even trigger another 15 free spins in the same way you did to begin with if luck is really on your side!

Eastern Dragon has some nice touches and the game itself certainly looks pretty good. It’s one of those games that is good to play for a while, but it may not be a keeper for you. A lot depends on how complex you like your slots to be, and this one may not deliver the most complex slot experience you’ve ever had.
Play Now
Previous slideNext slide